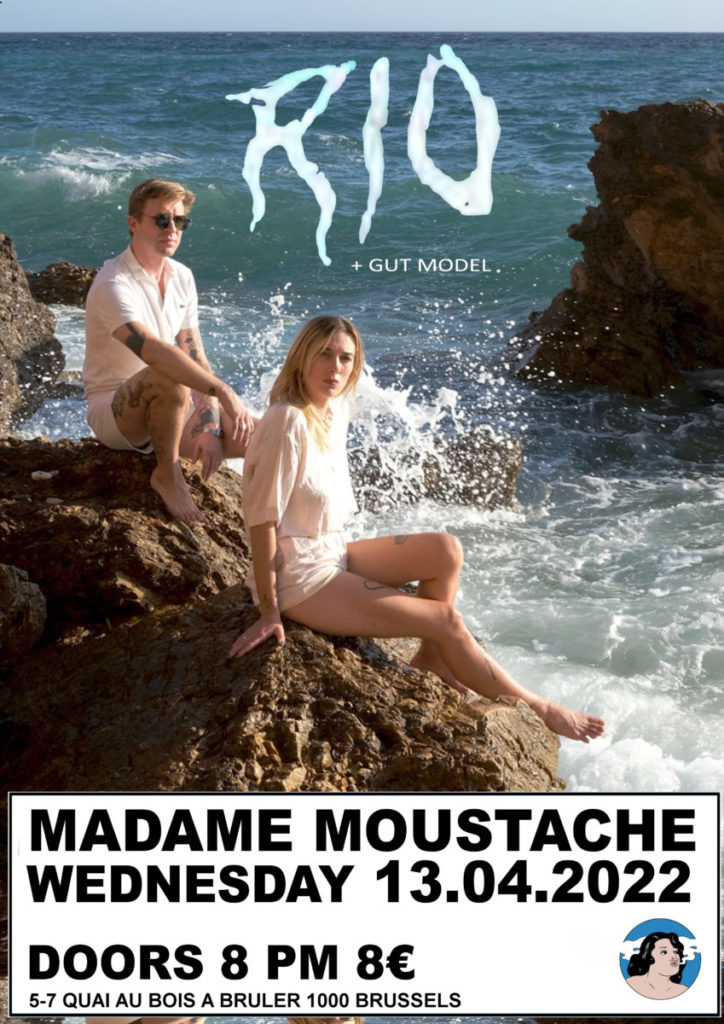 WED 13/04/21 – 20H00 | 8€
RIO + Gut Model
–
20H00: doors
21H00: Gut Model
22H00: RIO
23H00: Dj set
*new PA/sound system* by NEXO
– RIO
Obscure and luminous, naïve and serious, the duo formed by Maxime & Lio (Prince Harry, Komplikations, etc.) mixes opposites.
It was during the harshest of lock-down, in an house haunted by pasts histories with in the heart of Athens that Rio was born from the desire of these two, to put into practice their common vision of musics.
Machines, vocals, fragile but captivating lyrics: they record demos that will land in the analog compressors of Paulie Jan, a brilliant producer and arranger.
These demos become a Debut LP where the soundscape recalls these fantastic French Synth Wave duos. We meet Deux, Ruth, Elie & Jacno and more recently : Essaie Pas.
From nowadays interrogations to dreamy fantasies, Rio uses either french and greek lyrics to create a spleeny pop album between shadows and lights, quite like the Alkyonides, these few days in the heart of the greek winter where the spring pops up before fading again.
https://teenagemenopause.bandcamp.com/
– Gut Model
Stretching between punk and club music, the quintet Gut Model was born in Brussels from the meeting of members of Purrses and Lenny Pistol. Inspired by Brian Eno, Talking Heads or Gang of Four, Gut Model strives to assemble its malicious laments composed with ten hands on corrosive sequencers. In November 2021, the band decided to gather about fifteen projects of the Belgian alternative scene on “Jus de Plaisir”, a compilation tape presenting at the same time a first demo named “Upon Their Screams”. Shortly after the launch of their first live performances, Gut Model’s first single “New Tattoo” was released in February 2022. Less good than the Beatles, though.
——————————————-
You don’t need anymore a Covid Safe Ticket to enter Madame Moustache.